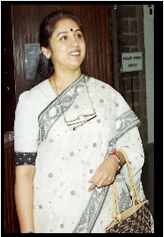 Including people with disabilities in the mainstream of public life is what the media must reflect in full measure and an example of this is provided by Revathy’s recent Hindi film, “Phir Milenge”, which has Mita Vasisht playing the role of a successful lawyer with a disability.

Revathy, who has won critical acclaim for daring to make an entertaining film with a social message, says having a disabled character in “Phir Milenge” was part of the casting dynamics that reflected a diverse and plural society. “Mita is a close friend of Abhishek Bachchan, who plays the lawyer in the film and who takes up the case of an HIV-positive patient who is dismissed from service. And she became disabled due to an accident at quite a young age. But it is her ability that has been focused in the film.”

Revathy, who was in Delhi to inaugurate the Second International Special Film Festival, says films must reflect the diversity of society and, therefore, not exclude any section. But such a casting has to be natural and must flow from the inclusive nature of a person, she feels.

And she is openly critical of the way disability is portrayed in films. Giving the example of a recent Bollywood hit “Mujhse Shadi Karoge”, she flays the stereotypical role in which Kadar Khan has been cast in the film where each day he displays a board outside his home stating that he has a new disability – “Aaj Mein Goonga Hoon”. Aaj Mein Behra Hoon” and so on. “Films should not entertain at the expense of a whole group of people who just happen to be different from us”, she says.

And while Revathy believes that including people with disabilities in roles that communicate their ability might reverse the negative stereotypical portrayal, she asserts that Mita Vasisht’s character just happened in the film. Well, that is what results when inclusion becomes a way of life, isn’t it?

Films are the most effective media to sensitize and also research on the outlook of a lot of people with disabilities. Films are a vast media where film makers have written characters with different disabilities.

Basically, when certain directors made films, they did their home work. They do a lot of research on characters and then they made the film. But certain times I would say that there are maximum comedy scenes where disability is used as comic character, which is something which I got very upset about. For this dialogue are going on. How to make film makers sensitized, to be little more sensitive to these issues and we are hopeful that we can do something about sensitizing the film makers.

“Anjali” was a very beautiful film. The disabled character was very beautifully portrayed by film director Mr. Mani Ratnam and after that I got more involved in disability sector.